Why Long-Term Treasury Bonds Still Belong in Your Client's Portfolio

Clients aware of the recent stretch of low yields for U.S. Treasuries have been asking their managers to explain why their portfolios contain long bonds. Given that ten-year bonds have been yielding about 2% and thirty-year bonds around 3%, near historical lows for the U.S., many clients question their exposure to interest rate risk. In this article we will attempt to elucidate the role played by long bonds in a well-constructed portfolio, and to provide some additional talking points that could be helpful for the advisor addressing questions about long bonds from their clients.

Most clients understand the concept of diversification to mean that a portfolio with more asset classes is generally better than one with fewer asset classes. They often don’t understand the role of correlations, or how much of the importance of diversification stems from how it reduces portfolio risk by using assets that have low correlations with one another. They need to understand that diversification has no benefit when assets are perfectly correlated with one another, moving up and down together in lockstep. In general, the benefit of diversification increases as inter-asset correlations decrease. Diversification results in a great deal of risk reduction in the case of negative correlations. If two assets tend to move in opposite directions – one usually goes up when the other goes down, and vice versa – then a portfolio consisting of both assets will tend to experience much less risk than either asset alone, as down moves in one asset will tend to be canceled out by up moves in the other asset. 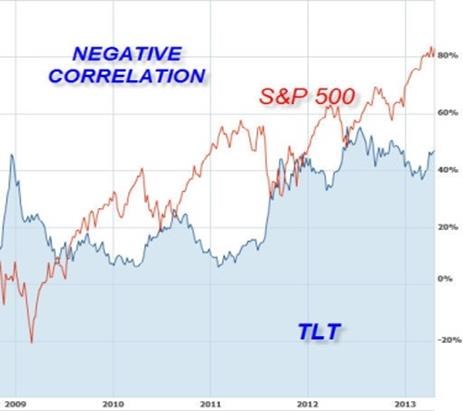 We suggest that money managers explain to the client how the long bond acts as a partial counterbalance to the stock component of his or her portfolio, perhaps using a chart such as this. Over the longer term, long bonds do have a fairly decent record of risk and return. But the key is that a combination of both stocks and long bonds, with the proper proportion of each, has much less risk, and is thus much less likely to experience short-term losses, than stocks (or long bonds) alone. This holds true whether the stocks held are purely domestic or, as is the case for New Frontier’s portfolios, span a wide range of global markets. These risk-reducing properties of U.S. Treasuries can be understood in terms of security market dynamics. Worrisome geopolitical and economic events can send shock waves through world markets, undermining confidence in global equities as well as in bonds issued by corporations and less stable countries. During such times of stress, the market shifts towards “safe-haven” investments, and the political and economic strength of the United States makes its issuances especially appealing in this regard. Conversely, given signals indicating increased stability and prosperity, investors tend to rotate out of safe havens and back into equities and other risky investments in an attempt to take fuller advantage of global economic growth. As new information is continuously released into, and acted upon by, the market, the result of these dynamics is a negative correlation between the returns of Treasuries and equities, on daily as well as much longer timescales.

We at New Frontier create and maintain portfolios with our patented optimization technology. New Frontier scientifically optimizes how various assets are weighted against each other in a portfolio. We find that holding the right amount of long treasuries allows us to also hold more aggressive positions in stocks, emerging markets and other higher-risk, higher- return asset classes without increasing the risk of the portfolio as a whole, since long bonds have a negative correlation to those assets.

As discussed above, the performance of U.S. Treasuries is intimately tied to the rest of the global economy. So, even if clients happen to be correct that long U.S. Treasury prices will decline from here, in all likelihood that means that stock markets will be rising even faster, leading well-designed portfolios to show overall gains. In our view, trying to forecast where equities and interest rates will be in the future is not part of designing the optimal portfolio – but understanding how they interact with one another certainly is.